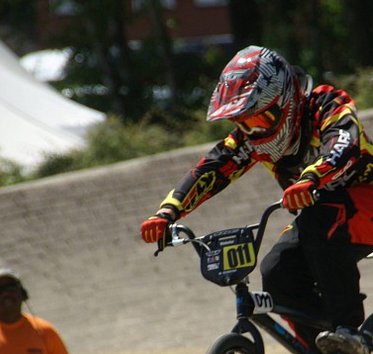 Round 5 & 6 of the European Cup 2015 were held in Denmark, on a very interesting track in Bjerringbro.

Friday night saw Round 5 for the Championship classes and with the strong winds coming from behind on the pro-section, it made life down the first straight extremely tough for the riders.

Liam managed to get some moto wins and moved on through intot he 1/4 finals where a 3rd saw him procede into the semi finals. Hitting the gate made life tough for him down the first straight, but he managed to enter the pro-section in 3rd, however a  flat tire saw him having to abort the race and he rolled home in 7th.

Saturday was round 5 for the challenge riders and this time the wind was more favourable for the first straight, this time making the second straight tough.

Axel worked his way through the motos and qualifiers into the finals, and a good start was lost when a small mistake on the first jump lost him speed and he dropped back to second where he stayed until the finish line. A tough day onm a long demanding track.

Saturday evening brought out the Championship riders again and due to the strong winds against the riders on the por-section it was decided by the race officials that the Jnr and Elite men would run the challenge line on the second straight.

Drawing the previous days winner in the motos and qualifiers didn't make things easier from Liam but he still menaged to pull some wins and this time worked his way into the finals. Again a late start saw him battling midfield down the first straight, however a good fighting spirit pushed him through into 3rd  after the first corner where he held on for a very important podium position, which automatically gave him the one and only spot for Germany in the Jnr Men class at the 2015 UCI World Championships. Well done Liam!

Sunday was the last day in Bjerringbro, and Axel again won his way into the finals. This time he was beaten down the first straight, and went into the first corner in second, again holding it to the finish line.

Overall a very successful weekend for the boys on a very demanding track  with a low start hill.